Reach for the sun with the Peridot crystal, an effervescent stone that harnesses the life-giving energy that turns night into day. The Vitamin D of your healing crystal collection, the Peridot crystal meaning is connected to the sun, making it your spiritual cheerleader that keeps you on the sunny side of life. The Peridot crystal shines like a light beam of energy, a stone of happy, light-hearted vibes and the perfect companion to lead you on a path of sunshine. Peridot is a sign that it's time to feel good, a simple wish and our divine birthright.

The Peridot crystal stone is a gem at inspiring the seekers of the universe. If it’s light and love that you're after, keep this cheerful and uplifting stone in your environment and give your Feng Shui a boost with its candy-colored hue and protective, powerful qualities. The Peridot is considered a wood element and works to promote abundance, prosperity, and happiness in your home. It also addsa pop of color to your interior design scheme, making Peridot an interior decorator’s dream. After giving it an intention, place a polished stone or statue in the southeast or east corner of your home and get ready for its powerful vibes to bring wealth and well-being into your life.

Dating back to ancient Egypt, Peridot was a favorite of Cleopatra, who wore the stone for its beauty and to ward off evil spirits. According to legend, the Queen's emeralds were actually Peridot crystals, which share a similar aesthetic to the highly prized jewel. Known as the poor man's Emerald because of its less expensive price, the Peridot crystal meaning can be traced back to the volcanic areas of Hawaii on the island of Oahu, where tiny Peridot grains can still be found washed upon the shore. According to ancient folklore, these pieces of Peridot represent the tears of Pele, the goddess of the elements. Created in a fiery pit of lava millions of years ago, the Peridot crystal gets its olive to lime green colors from olivine, a type of mineral made up of iron, silicate, and magnesium.

Created from the intense inferno of volcanoes, Peridot is believed to be a gift from Mother Nature and considered a symbol of the yearly renewal of the planet. The Peridot crystal stone meaning comes from the Arabic "fairat," the word for gem, and has been cherished for its healing properties since ancient times. Its dazzling sheen and lush color also gave light to the dark ages when it was incorporated into the Shrine of the Three Kings in the Cologne Cathedral in Germany. 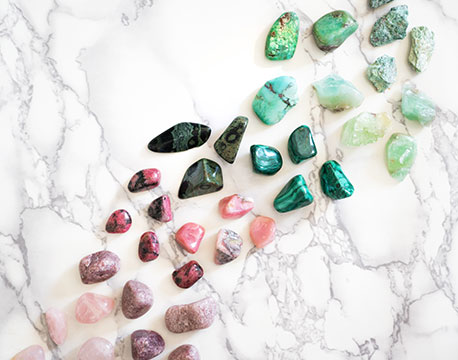 Gazing at the stone and its iridescent shade of lime green inspires images of the budding foliage of a forest, a symbol of abundance and prosperity. Taking a cue from regal legends, wear Peridot jewelry and attract love into your life when you place it near your heart. When you're basking in the glow of Peridot, feel the love of the universe protecting your heart and allowing you to fall in love with whimsical abandon. Like a goddess as a young girl, channel your free spirit as it exists in nature, an invigorating visualization especially for city dwellers. Meditating with the Peridot crystal properties shines a bright light on your journey of spiritual renewal and the discovery of new horizons.

Channel the Peridot crystal healing properties with a daily meditation session in your sacred space. Borrowing from the Native American tradition used for thousands of years, cleanse your environment and crystals with a smudging ritual using a sage stick. If you're in need of an emotional facelift, place raw Peridot stones over the heart chakra to clear out toxic emotions and feel your spirit opening up to love, the medicine to heal the world. Peridot also supports the solar plexus chakra and works to clear mental blocks, which is excellent medicine for skeptics of crystal healing because it opens up the mind to infinite possibilities of the universe and its healing powers.

Often called the study stone, Peridot crystal healing properties are also known to increase mental focus by making the mind more receptive to learning new things. Keep Peridot in your workspace or office and always have constant access to its powerful properties that give you the strength to persevere, especially during times of challenging academic pursuits. It was also believed by the Romans to be a wonderful medicine for depression. Keep a Peridot stone in your pocket or wear it as jewelry and use it as your daily antidepressant that protects you from negative energy while bolstering a sense of self-worth and motivation. Always stay in the direction of the light with Peridot, the feel good stone in the world of crystal healing.

Like the wise proverb says, "Keep towards the sunshine and the shadows will fall behind you."